I keep meaning to post updates of the craft and sewing projects I do, but then I find that it is too much effort to take pictures.  That trend comes to an end today, however as I have pictures of the sewing projects I did for an 80's themed benefit for the school I work at that I attended last weekend.  Enjoy! 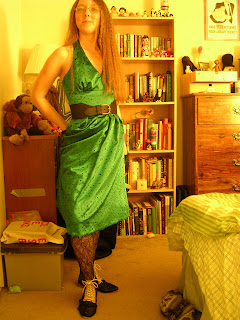 I made this dress about a year ago.  Apparently teal and polkadots were popular during the 80's (although they are clearly eternally fashionable) so I wore it for the event. 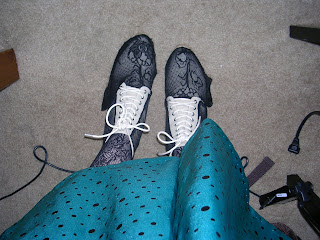 I know from Pretty in Pink that ankle boots were popular in the 80's (all my knowledge of the 80's comes from John Hughes movies) but the only pair I could find in my last-minute, no-car shopping was khaki colored and clearly would not match my outfit.  However, they were on clearance, and so were several pairs of black, lacy tights.  So I bought both and cut up the tights to sew onto the boots so that they'd be black to go with the outfit.  Plus, according to the highly reliable sources I consulted on the internet, lace was a popular element of the 'new romantic' look that was popular during the 80's. 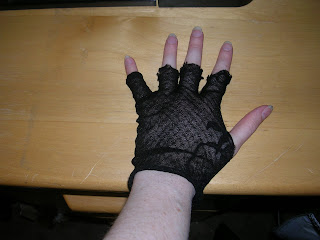 I used left-over parts of the clearance tights to make these fingerless gloves.  I just cut out a section of the legs then cut three slits into the end and sewed the edges up to make fingers.  I cut a hole in the side for my thumb.  All this was done last-minute the morning of while continuing my research by watching 21 Jump Street.  It was a purely academic interest--as a student of library science I am committed to research.  It had absolutely nothing to do with how adorable Johnny Depp is in it. 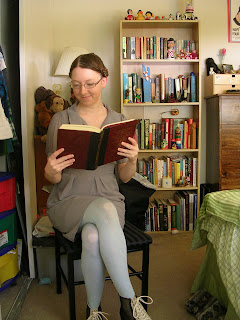 This picture isn't technically related to crafting, but it is related to books.  I got all dressed up to go see the new Jane Eyre movie because darnit all I'm a Charlotte Bronte geek and us geeks like to dress up for movies. 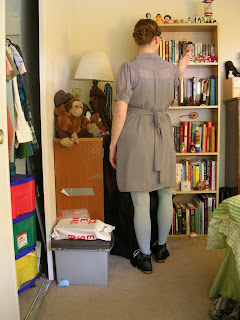 I am particularly proud of my fancy hairdo, which can be seen here as I consult my tbr bookcase (yes I have an entire tbr bookcase--my stack is that big!)
I hope you enjoyed my crafting pictures.  Perhaps I'll get around to posting my other sewing projects someday.  Maybe I'll even get with it enough to take in-progress pictures.  Maybe I won't.  Either way I feel that this post was worth it just for the title.  Making a good bad pun is its own reward.
Posted by auldschoollibrarian at 5:32 PM 1 comments

Email ThisBlogThis!Share to TwitterShare to FacebookShare to Pinterest
Labels: crafty Book talk: It all starts with a trip to the Quikmart for sandwiches.  Will sees the beautiful girl with the snake tattoo behind the counter and starts to flirt with her in his easy way.  But it's Ryan who she gives a rose to as they leave.  From that moment on Ryan can hardly think of anything else.  Will is usually the one to bend the rules, but soon straight-laced Cadet Captain Ryan is the one sneaking into clubs to see Carmen play and showing up for inspection with bags under his eyes.  Carmen likes this shy boy, but she refuses to be owned by anyone.  Carmen's grandmother taught her how to read her fortune in the cards so she can see her fate: romance, fortune, and treachery.

Rocks my socks: The story is told from four different view points, not only Carmen and Ryan but their best friends Will and Maggie as well.  Viewing these characters through the eyes of their best friends provides a perspective that grounds the novel and adds new layers to the characters.  They also provide more points of entry for the reader.  While most girls won't be able to identify readily with Carmen, many will be able to empathize with Maggie, for example.  There are quotes from the original novella interspersed throughout the story and one sums up why I enjoyed this novel best: "A man turns into a villain without realizing what is happening to him."  By having the perspective of not only Ryan but Will as well it is easy to understand him and feel sympathy for him.  Too many authors (and actors for that matter) fall into the trap of thinking that villains see themselves as such.  But most villains view themselves as the hero.  This is an important lesson to learn and goes far in helping to understand the world and the people in it.

Rocks in my socks: While Carmen and Ryan are complex characters Maggie and Will are a bit under-developed.  They seem mostly there just to act as foils and the story they're telling isn't really their own.  I can see why it was done this way, but they were my favorite characters so I wish there was a bit more meat to their parts of the story.

Every book its reader: I imagine fans of the opera would enjoy this retelling, although I'd warn purists away because it does make some major changes.  Knowledge of the opera and novella aren't necessary though, in fact I've never seen the opera or read the novella (although I bumped a filmed version of the opera to the top of my Netflix cue after finishing the book.)  I'd give it to anyone looking for a tragic romance or a study on the creation of  a villain. Grades 6 and up.

The Fortune of Carmen Navarro by Jen Bryant

Buy it at your local independent book store or check it out from you local library
Posted by auldschoollibrarian at 7:55 PM 0 comments Book talk: In a universe where Baconians go door to door trying to convince people that Shakespeare was really just a front-man and four thousand people in London go by the name John Milton people take their literature very seriously.  So when criminal mastermind Acheon Hades starts kidnapping characters from original manuscripts, erasing them from every copy, there is a public outcry.  Literary Detective Thursday Next is on the case, but with governmental secrecy and red tape tying her up and an adversary who can control people's minds, the chances of her solving the case seem slimmer and slimmer.  But no matter how dangerous things get, Next can't give up--not when the stakes are the very existence of her favorite novel.

Rocks my socks: I absolutely love the universe created for this novel.  Radical surrealists riot in the streets and people have pet dodos.  The local theatre plays Richard III every Friday and cast members are chosen from the audience, who dress up for the production and have call backs for lines like it's Rocky Horror Picture Show or something.  I want to attend this production of Richard III!  I am thoroughly convinced now that if people dressed up to go to Shakespeare plays like they did for Rocky it would be a far better world.  There are also excerpts from fake books and newspaper clippings at the beginning of each chapter and I always love those kind of extra details.

Rocks in my socks: The story wasn't actually very compelling and even the characters weren't particularly endearing or well developed.  While the details of the universe were unique and pleasantly surprising the plot was pretty predictable.  This didn't bother me too much though because I believe it was meant to be.  For example early on in the novel the characters complain about how Jane Eyre doesn't end up with Mr. Rochester.  It's pretty easy for anyone who knows the real ending of Jane Eyre to predict what ends up happening, and the target audience of the novel is definitely people who are privy to this information.

Every book its reader: The appeal of this book is in its world-building and its literary references.  It's a gimicky novel and I can accept that and thoroughly enjoyed it, but I know that that type of novel isn't for everyone.  If you're looking for a typical whodunit mystery or a fast-paced thriller or a complex character study, move along.  But if you enjoy the absurd and clever allusions, then this is the book for you.

The Eyre Affair by Jasper Fforde Book talk: Milo has become pretty good at moving.  So when he moves to his 5th house in 13 years he knows the drill of being a new kid and is hoping just to make it through the year alive.  There are some good things about his new school, like the gorgeous Summer Goodman and his new friend Marshall aka One-Eyed Jack.  But there are also some set backs, like the fact that Summer Goodman doesn't even know he exists while his loser neighbor Hillary keep putting notes in his locker.  Sometimes Milo just wishes he could turn invisible, even though Marshall insists that laser vision or teleportation are far better superpowers.  It doesn't matter because Milo doesn't have any superpower, although he certainly could use one.  At school he's failing math, at home there's nothing but silence, and he can't even finish an entire special Booger Breath Freezie.  But with Marshall and the friends he makes along the way, perhaps he can make it through the year alive after all.

Rocks my socks: Milo spends the novel coming to terms with his mother's death and working through issues of identity and trying to fit in but despite the heavy subject matter the novel is full of humor and a light-hearted charm that made it easy and fun to read.  The book is illustrated by the author with cartoon-like drawings throughout and there are other add-ons like lists Milo makes or comic pages showing certain scenes that give the book the feeling of a journal where Milo is putting down his thoughts as he struggles to sort through his feelings.

Rocks in my socks: The narrative felt a bit over-simplified at times, even considering the target audience.    The characters other than Milo are not very developed and some characters that I feel should play a stronger part in the story, like Milo's sister, are rarely mentioned.

Every book its reader:  I'd give this to fourth to seventh graders looking for a humorous school story.  This will have particular appeal to those who enjoy journal-style books with cartoons in them like the Amelia or Diary of a Wimpy Kid books.  The narrative is, as I said, pretty simple so it would be good for kids who aren't very strong readers.  Kids who appreciate the humor of Milo and Marshall trying to drink the "Booger Breath" flavored Freezie will enjoy this novel.

Buy it at your local independent book store or check it out from your local library
Posted by auldschoollibrarian at 7:23 PM 0 comments