I became interested in this book while reading Dan Simmons's Drood this summer.  Considering how much I grew to dislike the fictional version of Wilkie Collins that narrated Drood, I was surprised at how much I enjoyed The Woman in White.  I was also surprised by how modern the pacing of the novel felt considering that it was written over a hundred and fifty years ago.  This is an early work of detection fiction, and it is easy to see its influence in modern mystery novels.  The novel is told as a series of journal entries and testimonials from various people and Collins does a wonderful job of switching between them and capturing each character's voice.  My favorite was naturally Marian with her sparkling wit and surprising bravery.  She is a capable heroine and sets herself apart in many ways, including her apparent disinterest in finding romance for herself.  I'm glad that I was able to get to know her! The Woman in White by Wilkie Collins: buy it or check it out today!

Miss Annie is a kitten who is ready for adventure, if only they'd open up a window to let her outside!  She's still young, but she knows the ways of her house pretty well by now.  There's the dad who is a writer "That means he gets back his own stories in the mail and yells, 'Oh no! They didn't want it!' What a funny job."  Then there's the mom who works for a literary journal and is gone during the day.  Finally there's Sarah who spends hours talking to her best friend Keshia.  Miss Annie knows just who to ask for food, how to use her cute looks to her advantage, and has befriended the mouse that lives with them.  But what more adventures will await her when she finally gets her freedom?  This is an adorable, light-hearted comic that is sure to appeal to children who love cats.  Miss Annie: Freedom! by Frank Le Gall, illus. by Flore Balthazar, color by Robin Doo: buy it or check it out today!

When they heard that cousin Sophy was coming to stay everyone expected a pitiable creature.  The poor girl was raised without a mother and forced to travel all over the continent under the negligent eye of her diplomat father.  So when Sophy arrived with a menagerie in tow, dressed to the nines, and clearly capable to taking care of herself they were completely shocked.  It's hard to resist Sophy's charms for long, though and soon she would leave an indelible mark on the whole family.  My mother gave me this book to read, and it just shows how well she knows me.  This book has it all: Regency dresses, balls, witty repartee, a headstrong woman, even a monkey!  Sophy's quick rejoinders had me laughing and the light-hearted drama as everyone settled down into their proper matches kept me entertained.   This a perfect frothy read for when you just want something fun to distract you and pass the time.   The Grand Sophy by Georgette Heyer: buy it or check it out today!

Everyone I've talked to that has read this book absolutely loved it.  It's the story of two teens, Sam and Emily, who fall in love at first sight.  The only problem is that Sam has a tendency to leave town quickly.  He has an abusive and schizophrenic father who keeps them on the run and living in dismal circumstances. Sam's younger brother is intensely involved in his drawings, but is unhealthy and usually stays silent.  I can see why so many people like it.  It's fast-paced and knows how to pull on the heart-strings.  It reminds me of a  Lifetime movie.  I really wanted to like it too, but I didn't. I don't remember a single character showing any sign of having a sense of humor.  The only even vaguely humorous scene was the physical comedy that ensued when one of the book's antagonists was getting his just desserts.  But I couldn't share in the schadenfreude.  It felt almost cruel and I didn't like how two dimensional his character was.  In fact all of the characters felt flat to me.  The good characters were unfailingly good and practically perfect except for circumstances beyond their control.  The bad characters were bad all the way through and not portrayed with a hint of sympathy, even the father who was clearly suffering from serious mental illness. I like my characters to exist in shades of grey and my plots to have complexities that resist easy fixes.  The end of this book was full of circumstances that conveniently lined up to provide everyone with what they deserved in the last couple of chapters.  Even the plots of minor characters were wrapped up with a neat bow that almost always involved them finding love.  If you want a clear-cut, heartwarming story of good triumphing over evil then this is the book for you. But if you prefer stories with humor and moral ambiguity, then you can skip this one.  I'll Be There by Holly Goldberg Sloan: buy it or check it out today!

When Jezebel first sees Tommy, she thinks he's a ghost.  When she finds out the truth, it's even stranger.  Tommy is a member of the Explorers' Society, a group that knows how to unlock hidden portals to other worlds.  But sometimes when they go to these other worlds, something dark follows them back to Earth.  The Dead Gentleman is building an army and preparing to take over.  After he attacks the headquarters of the Explorers' Society, Tommy and Jezebel are all that stand between humanity and the apocalypse.  This book was great fun with references to many of my favorite things: Tesla, Lemuria, H.G. Wells...the list goes on.  Despite being about a Dead Gentleman that destroys everything in his path, there aren't many gory details making it solid middle-grade fiction fare.  However the plot doesn't hold up to close scrutiny and there were many cliched elements that left me with a sense of déjà lu.  Many of the characters were two dimensional and the villains were evil incarnate putting considerable energy into destroying worlds for no discernible reason other than to cause suffering.  It was a quick and entertaining read though.  If you're looking for a fast-paced fantastical adventure, this is a solid choice.  The Dead Gentleman by Matthew Cody: buy it or check it out today! 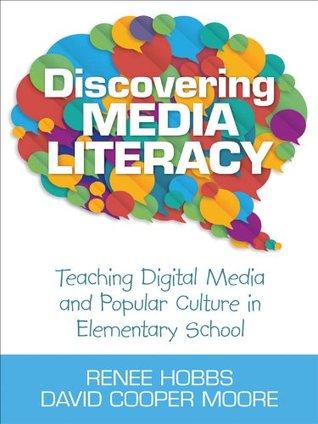 This is an excellent read for elementary school teachers and librarians.  Hobbs and Moore define media literacy, discuss why it is so important to teach it our students, and describe how they have gone about doing this.  There is a nice balance between philosophy and practical examples of lessons they have done with students.  My only quibble is that I wish the example lessons had listed which grades they had actually tried them with.  With the increase of digital tools in our classrooms and the ever-present influence of the media on our students it is imperative that we teach them how to become thoughtful media consumers, recognize how others use media to deliver messages, and learn how to use digital tools to make their voices heard.  I'll be attending a workshop on the topic this summer to better integrate media literacy with my students and I am looking forward to it!   Discovering Media Literacy: Teaching Digital Media and Popular Culture in Elementary School by Renee Hobbs and David Cooper Moore: buy it or check it out today!

Posted by auldschoollibrarian at 2:20 PM 0 comments