Since You've Been Gone review

Book talk: Sloane was the best friend a girl could ask for. No matter what they were doing, Sloane would turn it into an adventure and Emily could count on her to draw her out of her shell. Which is why Emily couldn't wait for their epic summer to begin. But then Sloane disappears without saying a word. The only clue she leaves behind is a list of things for Emily to do: from apple picking at night to kissing a stranger. Armed with her list, Emily sets out to check items off and find Sloane. Along the way she ends up having the most unexpected and wonderful summer of her life.

Rave: I like that the main driving force of the plot was the friendship between Sloane and Emily. It was interesting having the story told from the perspective of the friend that isn't as popular and often feels like an after-thought. The story deals a lot with what it's like to be friends with someone with such a strong personality, especially for a shy person, and what it's like to be suddenly left alone to cope with life. Emily makes admirable strides but I like that her personality doesn't suddenly change overnight and that it takes her and other characters times to overcome their fears. I also really like the relationship between Emily and Frank and how it slowly grows out of a friendship. I was expecting a frothy book about high school relationships and was surprised by how much I liked this book. I was completely absorbed and flipping pages quickly.

Rant: There were a couple of points that stretched my credulity a bit, but I was so taken with the characters I didn't mind.

Every book its reader: I'd give this to anyone looking for a story about summer and friendship 7th grade and up.

Bonus Quotes:
“I somehow knew that the particulars didn't matter. She was my heart, she was half of me, and nothing, certainly not a few measly hundred miles, was ever going to change that.”

“I don’t think you have to do something so big to be brave. And it’s the little things that are harder anyway.”

“Do you not like The Beatles?" Frank asked, sounding shocked. "Do you also not like sunshine and laughter and puppies? I don't think the Beatles get enough recognition. I mean, when you look at their body of work and how they changed music forever. I think there should be federal holidays and parades”
Source: independent book store author event (Book Passage)

Since You've Been Gone by Morgan Matson: buy it or check it out today!
Posted by auldschoollibrarian at 10:30 AM 0 comments

A Volcano Beneath the Snow 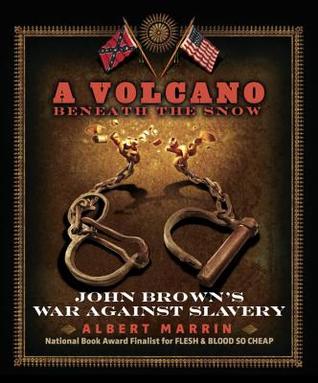 Book talk: John Brown is a controversial figure: depending on your perspective he could be seen as an inspiration who stopped at nothing to fight for what he thought was right or as one of the earliest domestic terrorists. The truth lies somewhere in the murky area between these two extremes. Read this book to uncover the bloody and complicated history of slavery, the civil war, and John Brown.

Rave: I really enjoyed the nuanced approach Marrin took towards John Brown but my favorite parts were when he pulled back to provide further context. His section on the history of slavery was excellent and contained a lot of information that was new to me and I wish I had earlier. Marrin doesn't pull any punches and he doesn't come down on any one side but allows the reader to explore the complexities of history and see multiple perspectives.

Rant: He hinted a lot about its connections to modern-day terrorism but I wish he had gone into this even further. Perhaps that will be a future book?

Every book its reader: I'd give this to history enthusiasts 7th grade and up or those looking for an excellent narrative nonfiction.

A Volcano Beneath the Snow: John Brown's War Against Slavery by Albert Marrin: buy it or check it out today!
Posted by auldschoollibrarian at 10:26 AM 0 comments

Book talk: The Romanov family reigned over Russia in a time when unrest was growing and trouble was on the horizon. As the world outside changed, they grew increasingly out of touch as their isolation both protected and endangered them. Then, on one infamous day, the whole family was murdered to end the imperial line. Rumors of the survival of the young Anastasia spread, but the fate of the family was sealed. What led to this event and what was it like to grow up in Russia's last royal family? Find out in The Family Romanov!

Rave: This nonfiction book reads like a novel as the characters are developed and the plot races towards its inevitable tragic end. Fleming did an excellent job taking a really complicated era and making it understandable. This is everything I didn't learn about Russian history in school, but probably should have. Additional excerpts about lives of the peasants at the time helps to provide a wider context and make sense of what happened. An excellent read!

Every book its reader: I'd give this to students looking for a biography or narrative nonfiction 7th grade and up.

The Family Romanov: Murder, Rebellion & the Fall of Imperial Russia by Candace Fleming: buy it or check it out today!
Posted by auldschoollibrarian at 10:24 AM 0 comments

Book talk: Twins Josh and Jordan were raised with a ball in their hands by their father, a retired professional basketball player. On court they dominate and make an unbeatable team. Off court, things aren't going as well. When an off-court argument leads to an on-court lash out Josh gets kicked off the team. Then, just when everything in his life seems to be coming apart at the seams, things take a turn for the worse.

Rave: I absolutely adored this novel even if it did rip my heart out and dribble it around for a while. I know next to nothing about basketball but the language of the poetry kept me completely enthralled even when describing games. The main draw of the story though is the family relationships at play which are slowly revealed through the first person verse narrative.

Every book its reader: I'd give it to fans of basketball or poetry or just those looking for a good story with a strong emotional impact. I'd say it's 5th grade and up.

The Crossover by Kwame Alexander: buy it or check it out today!
Posted by auldschoollibrarian at 4:51 PM 0 comments 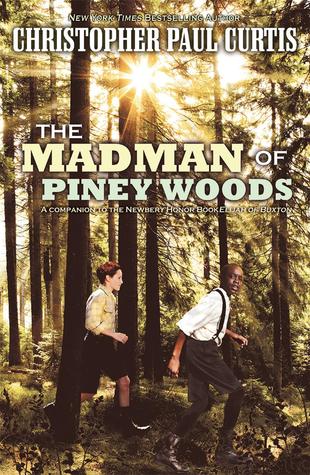 Book talk: Benji and Red don't know each other. Benji wants to be a star reporter while Red has his sights set on being a scientist. Benji is in an ongoing war with his younger siblings involving a series of over-the-top pranks while Red is an only child who has to watch out for his grandmother's wrath. They have very little in common, but soon the woods that separates their two towns will bring them together. Adults warn children not to stray in Piney Woods, they say that a madman lives there. Both Benji and Red grew up hearing fantastic stories about the madman, but when they finally encounter him and learn the truth, it tests their strength in ways they never expected.

Rave: Christopher Paul Curtis has a special knack for keeping me in stitches laughing for a whole book and then hitting me with a punch to the gut in the climax that leaves me a sobbing wreck. All the characters are so well drawn. They are flawed but they come together in such a moving way. Curtis tackles multiple issues from slavery to alcoholism to abuse but the novel is still uplifting and at points downright hilarious. I don't know how he does it.

Every book its reader: I'd give this to students looking for a funny book, historical fiction, or a touching book about family and friendship. 4th grade and up.

Christopher Paul Curtis has his own site

You can find a discussion guide on the publisher's website

The Madman of Piney Woods by Christopher Paul Curtis: buy it or check it out today!
Posted by auldschoollibrarian at 9:47 AM 0 comments